When installing Mozilla Minefield (Firefox daily builds) on Ubuntu, it automatically creates a new profile and copies your current profile there. But on Windows this thing doesn't happen.

When installing Firefox 4b6 on Windows 7 the same profile as the regular installation is used. This can cause a lot of problems, specially if you use add-ons. Some of these problems are:

The solution is pretty straight forward. First we must create an additional profile. To do this you must access the Firefox profile manager. Go to your Firefox 3.6 shortcut properties and add "-P" to the Target field. It should look like this:

Save and open Firefox with that shortcut. The profile manager windows should appear (image bellow), click on Create Profile and create the "beta" profile. 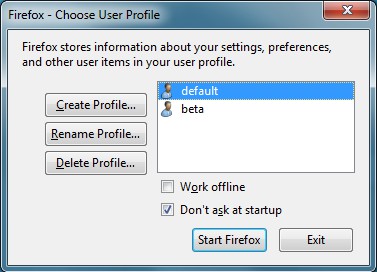 UPDATE: Another way to solve this is to install the portable version of Firefox beta.